Now celebrating their 30th anniversary, Suzuki’s GSX-R supersports have fulfilled the sporting ambitions of multiple generations of enthusiasts. As a guy who owned and raced the original GSX-R750 when it was introduced to the States in 1986, The demography of the all-new GSX-S models are targeted to upright ergonomics.

Suzuki identifies the audience for its GSX-S (S stands for Street Sport) as experienced riders age 40 and up. These are guys who primarily sport ride on weekends, but will occasionally commute on their bike or do long-distance touring, sometimes two up.

At the core of the 2016 lineup of Suzuki GSX-S1000 models—which includes a naked (with ABS option) and a faired ABS-equipped F version—is the 2005 GSX-R engine. This is the much lauded 999cc long stroke inline-four, which has better midrange torque than more recent Gixxers. Revised ports, cam timing, and lobe profiles all further conspire to boost low- to midrange torque delivery. The 44mm SDTV throttle bodies are those of the GSX-R, while stainless steel valves of the same diameter have replaced the titanium ones valves of the GSX-R. The six-speed gearbox has identical ratios, but two teeth have been added to the rear sprocket for lower overall gearing. A conventional clutch has replaced R’s slipper/assist unit. 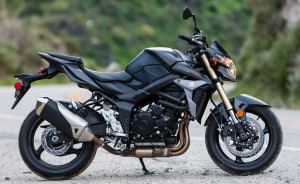 The overall result? This is a smooth running tractor of a motor that offers steady roll-on response from as low as 1,500 in top gear. Stoplight departures are a snap, and slick shift action means the bike reaches speed in a very fluid fashion, with gear position indicated on the dash.

Engine vibes remain subdued until the LCD tachometer passes 6,000 rpm, where a tolerable buzz builds in the taper-style Renthal Fatbar. Freeway cruise is pleasant enough, with the engine turning 5,500 rpm at an indicated 80 mph on the compact all-digital dash. 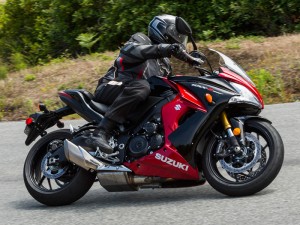 As the second Suzuki model to feature traction control, the GSX-S utilizes the same left bar-mount switch array introduced on the current V-Strom 1000. The system offers three levels of TC sensitivity, and the calibration is sportier than on the big Strom. The rider can switch among the settings or even turn TC off while riding. Level 3, intended for wet conditions, saw the yellow status light on the dash signal ignition retard intervention under modest acceleration on the dry road. It might take some serious cornering effort to trip TC in the normal setting, and Level 1 seems like it will prove useful at an aggressive track day pace. Turing the TC off allowed for unadulterated wheelie antics with a snap of throttle in the bottom two gears.

The presence of GSX-R style aluminum foot pegs with no rubber damping hints at the S’s sporting intent. In fact, its twin- spar main frame is said to be lighter than that of the GSX-R, and its gull-style swingarm is that of the R. With a claimed curb weight (with 4.5-gallon tank full) of 456 pounds for the naked (add 5 lb. for ABS) and 472 pounds for the F, both flavors of GSX-S are featherweights of the category.

The fully adjustable 43mm KYB inverted fork appears to have been lifted from the 2005 Gixxer parts bin, providing firm sporting performance and excellent feedback and feel when attacking an apex. The shock is a garden-variety unit of the same make, featuring a ramp-type spring preload collar for ease of use along with adjustable rebound damping. While a shock upgrade is worth considering, the stock damper proved fit for sporting duty.

THREE WAYS TO MAINTAIN YOUR SUZUKI ENGINE THIS RAINY SEASON