Suzuki has definitely built on the success of its popular entry-level street bike line with the addition of the 2015 Suzuki Gladius SFV650. Fans of this model family will recognize the presence of the DNA, sans the rather effeminate colors associated with that model, which should make this new ride more appealing to males and definitely put an end to the ‘it’s for the females’ cliche. This ride strikes a balance between technology and frugality, as well as aggression versus control, new riders can ride with ease without breaking important bones or their banks. 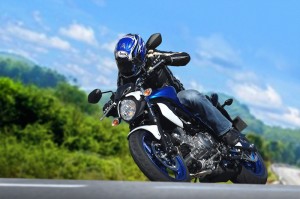 This Suzuki is a fun everyday bike, a compact and upright ride powered by a durable  645cc 90-degree V-twin that gets smooth with revs while boasting a broad powerband and excellent fueling. Although it’s not a rocket by modern sportbike standards, the Suzuki is the quickest of our trio of 650s to 60 mph, and the bike upshifts with a satisfying precision.

Suzuki’s middle-displacement SV650 and its derivatives are widely known for their ability to make newer riders feel like they’re in complete control, and the SFV650 is no different thanks to its low seat height and narrow waistline, which allows height-deprived riders to plant their feet without tearing their hamstrings. A relaxed reach to the generously bent handlebar makes the rider triangle feel even more natural, but that’s not to say the ergonomics and controls are perfect. The handlebar feels excessively narrow, for instance, and the standard seat is built around a disproportionately thin cut of foam that makes the footpeg-to-seat gap feel especially tight. Worth mentioning is that Suzuki will sell a 20-mm-taller seat as an accessory.

The SFV feels more at home on a tighter section of canyon road and entertains by way of its impressively versatile engine, which builds power seamlessly through the entire rev range and has enough pep up top to accelerate past cars without the hesitation you’d expect from a lightweight bike. That top-end performance doesn’t come at the expense of low-end propulsion, and there’s more than enough torque down low to push you off corners or get you away from a stoplight with relative ease. Vibrations are nil at either end of the rev range, and we couldn’t find any faults when shifting through the six-speed transmission. Did we expect anything less from the V-twin lump? Not really. Suzuki’s had a long time to perfect this powerplant, and it shows.

The SFV’s chassis works well considering that the bike is meant to be affordable and unintimidating, or in other words, less like a sportbike. The steering is quick, for instance, and the bike’s low center of gravity makes it feel especially light through a set of tight corners. The preload-adjustable shock and fork aren’t supersport-firm and move around almost uncontrollably when you start to ride the bike through the canyons with some aggression. That’s to be expected from a bike like this though, and in the SFV’s defense, it felt comfortable in all other environs. (As a side note, we’re extremely curious if an older GSX-R shock will mount up easy enough).

The SFV’s budget-based platform is exemplified more by the braking package, which is headlined by two-piston front calipers that bite on 290mm dual floating brake discs and by a single-piston rear caliper that clamps down on a 240mm disc. The brakes get the job done, but their performance as a whole isn’t anything to write home about as they lack power, feel, and well, everything you’d expect from a good set of binders.

That less-is-more design isn’t a complete disgrace to Suzuki’s lineup though, and we’ll admit that we were impressed with the SFV’s fit and finish. The black, steel tube frame looks chic, for instance, and we feel like the tank/frame covers are just as nice a touch.

HIGH EXPECTATIONS
Unsurprisingly, all of the things that we came to appreciate about the SFV are the same things that we came to appreciate when we rode the Gladius back in 2009. It’s an undeniably good bike for newer riders, and still has plenty of performance to please the progressing sportbike enthusiast. We expect the SFV to perform better on the showroom floor than its ill-fated predecessor did, as the name change and new color scheme will appeal to a wider audience.

THREE WAYS TO MAINTAIN YOUR SUZUKI ENGINE THIS RAINY SEASON